How would I have done this before?

September 20, 2017
I've been doing 'handyman' stuff for years.  I think its part of my father's legacy.  He would never hire someone to do something that he could do himself!  Of course that meant some things never quite got done.  Hmmmm. The apple doesn't fall far from the tree...

Before Patrick passed away, I often used his big GMC van to haul plywood, sheetrock, cement sacks, name it.  I could fit 12' boards inside, stretching all the way forward, between the front seats to the engine console and then close the back doors.  But we sold it.  It was getting on in years (16) and miles (100k+) and we really didn't have a place to park the full-size behemoth in addition to our other two vehicles.

After a year without the van, I realized a lot of the stuff I would haul didn't need to go in the back of Holly's one year old Outback.  Sure, with the seat backs down, it could haul a lot, and we did. But lumber, messy sacks of cement, and wet bags of mulch were things I didn't want to risk putting back there and then feel responsible for messing up our 'nice' car.

So, I decided to start looking at a pickup truck to replace my 2013 VW GLI.  My biggest aversion to a pickup was the jouncy ride.  I've driven a bunch of pickups at work, all Ford F-150's, and was always disappointed in the jouncing around on pavement breaks.  "It gets better if there's a load", my colleagues would say.  But, I knew my ass certainly isn't big enough to alter the suspension in a F-150 and the loads would only show up when I went to Home Depot.

Looking over reviews, I found that the truck generally regarded as having the smoothest ride was the Dodge.  But, my god, could I put myself in a Dodge pickup?  I mean, I had a '87 Ram, and it was total junk.   But, maybe I was not giving the Dodge a chance.  Maybe I just needed to go test drive one and I would find it to be well-appointed and comfortable.

So, one morning about a year ago, I decided it was a good day to go look at pickups.  In the coffee room at work, I mentioned I was going to look at pickups, and I expressed my interest in the Dodge, and why it was at the top of my list. All but one of my audience nodded their heads, agreeing about the Dodge being a smooth ride, but at the same time shaking their heads because it was a Dodge. Then the lone outlier spoke up.  "Why don't you go look at the Honda Ridgeline?"

"Huh?  What Honda?" I knew they quit making Ridgelines a couple of years ago. But as Gee explained, I came to realize Honda had introduced a new version.

Back in my office, googling the new Ridgeline, I liked the looks (I couldn't stand the sail-sided look of the old Ridgeline, and found the reviews to be encouraging.  A quick email check using my employer's new car benefit program found new Ridgelines in Baton Rouge and Houston, with their deals being "no more the $75 over sticker price." Searching my local Honda dealer, I saw they had a couple of Ridgelines in stock, so I went over  to take a look.

Well, of course, the salesman puts me in the drivers seat and we go for a drive.  The ride was better than my GLI and no worse than Holly's Outback. Tons of power. Done.  No need to go look at Dodges or Fords or anything else.

So now its been a year of hauling mulch, plywood, plants, lumber, and anything else that either wouldn't fit or dint belong in the cab, like a caged possum I trapped in our attic one night. Boy, do they stink. You don't want that thing anywhere you can't hose off. 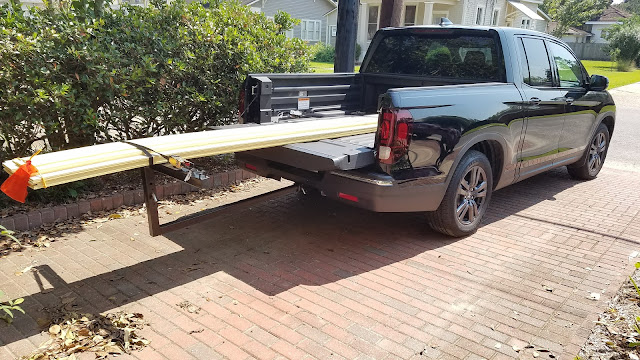 I put 10,000 miles, maybe a little more, on my Ridgeline in a year, and I'm averaging 20.1 miles per gallon with 54% of those miles being city miles. I know that because I text my miles, gallons and price to a nifty website called fuelly.com that does all the work for you.

I am very satisfied with the choice I made. Comfortable city or highway.  Good hauling capacity. With the rear seats folded up, Nellie has the run of the back of the cab. And I've found nothing wrong yet, other than it makes me want to just drive and drive...

January 07, 2018
WARBIRDS   Is a collection of photographs taken at the Lafayette (LA) Regional Airport. The post was was created in Adobe Spark, a no-programming app for creating dynamic pages with an emphasis on Lightroom CC integration. WARBIRDS
Read more

Boats along the beach

I traveled to Brazil for the first time recently, staying in Balneario Camboriu at night, while attending to work in a nearby industrial city. Sunday morning was free time, so I decided to walk the 3-1/2 miles to Barra Sul. There is a good sidewalk that runs along the beach that I anticipated would make for an easy walk. Along the way, I ran across a couple of large rowboats. I'm not sure what these are for -- fishing, fitness, fun, or what. But they made great props for a picture looking back up the beach to the north. I only had my Nokia Lumia 830 with me. But with optical image stabilization, it produced more than acceptable results.
Read more